I don't usually follow politics, but lately my head-under-a-rock default hasn't been working for me. Indeed, in order not to notice the turmoil over the new American president, it's not enough to stick your head under a rock.  You also have to pick up the rock and drop it on your head repeatedly.  Whatever your political persuasion, it should be clear that we have people with different ideas of what our problems are, and as such, we're not going to agree on the solutions. So we have people watching their leaders (okay, one leader) addressing a reality they don't share by taking actions they cannot condone.

I know the feeling--disbelief, anger, but mostly helplessness.  I had all those feelings last autumn, waiting for and watching the General Conference Annual Council.  I got to see church leaders (more of them) deal with an entirely different idea of what our problems are.  To me, it was clear that the troubles were arthritic institutionalism and a failure to apply our values to our employment practices.  But to them, it was simply astounding insubordination.  The issue, of course, was ordaining women who pastor.  And their response was very nearly the one that has been called "nuclear," the administrative dismantling of the offending entities.  Although, for the sake of unity, (or perhaps to get policies in order first) the process of pushing the button has been extended into next year.

I don't know what it felt like to you, if you were watching, but for me it was a kind of identity crisis.  I felt adrift, alienated from my denomination, whose choices and priorities I couldn't recognize anymore.  And although the crisis is delayed, I remember walking through the midst of it--long walks with Jim when I had other work to do, wondering what we would do with ourselves if the denomination imploded.  Sober contemplation of just how much of my identity was bound to the church--my childhood, my education, my social life, all of my volunteer time.

So I've been thinking again about how to get through the unstable times, because I am certain more, and larger, are probably ahead.  There were a few anchors that gave me a ground for my identity, and brought me through to the other side, the place where I can live in this reality.

1. Feed the human being.  We are still human.  If the great big constructs of my life were out of whack, the foundations were still there.  I went outside and looked out at the horizon.  I made sure my eyes experienced green whenever possible.  I fed my senses, simple things like colors and  flavors.  I made sure to notice when the children were funny, or unbearably cute.  I reminded myself that I was happy.  The joy of life is not controlled by people in suits in meetings.  The center of your soul is still the human being whom God created, among other purposes, to see, and touch, and taste the wonder of life.

2. Feed the Christian.  I needed my faith to be about something else, something besides gender equality, as sold as I am on the idea.  I was weary of advocacy, and sick from disappointment. I sat down with CS Lewis's Mere Christianity, and other similar works.  I listened again to simple themes of my faith, and discovered they are bigger than I remembered them.  I forget sometimes, distracted by other ideas.  But it turns out that creation and redemption are still enough to feed, and heal, and fill the human heart.

3. Live locally  I doubted my denomination, but I never had to doubt my local congregation.  I realized, in hindsight, that I was making the same mistake many people make--believing that the Seventh-day Adventist Church is centered in Silver Spring, Maryland, rather than in the local church.  And I know not everyone is as lucky I am, to have a church family which feels like "your tribe." But we all have a tribe.  Belonging cannot be done by numbers, over long distance.  It's acceptable--it's even preferable--to find your community closer to home.

So perhaps the Adventist identity crisis of 2016 was good for me, because it forced me to come back to the foundation of my identity.  After all, I can't be a good Seventh-day Adventist unless I'm first a good human being, and Christian, and member of a local community.

I'm sure there's going to be an Adventist identity crisis of 2017, and it's probably going to be a doozy. And as a member only of a local church, I know I will have exactly zero influence over it. I don't know what will happen to the denomination, but I have a say in what happens to me, now.  Because I have an identity I'm sure of.  And I pray that you will, too. 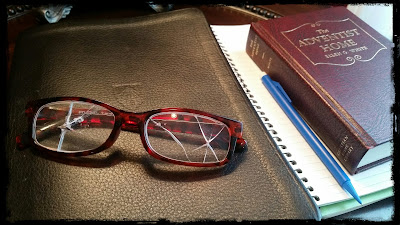 Posted by theotheradventisthome at 3:31 PM