The Gospel in Nail Polish

"Tell your wife," the anonymous comment read, "to dress appropriately for church.  No more pants and spaghetti straps."

I held the blue paper in my hand, and turned it over a few times.  It was the most ridiculous thing I had ever seen, at that moment.  It was a pastoral review form.  And this member wanted to talk about my clothes.  I wasn't sure if I wanted to throw it away, or wear it as a badge of honor.

Yes, I knew people noticed me.  And I knew I was in the traditional East.  I had heard, on a Sabbath afternoon, perfectly serious people talk about the color of the elder's socks (visible as he sat on the platform) as if this was legitimately their business.  But I had also expected I had earned some slack, since they had known me more than three years, and I had been struggling to pull together a maternity, and then nursing-friendly wardrobe I could afford.

I know people notice me. I am married to the pastor, and everyone knows who I am. So I have tried to be a good example, including my appearance, since that is all some people know about me.  But being a good example means something in particular to me.

I have noticed, in my 18 years of being the pastor's wife, that notes like this have always been anonymous.  I have never met the clothing police face to face.*  In fact, if it weren't for the anonymous notes, I couldn't tell you that the critics even existed in my churches.**  I have to conclude that either there are very few of them, or they aren't passionate enough about their opinions to get serious.  So I don't feel obliged to please them.

Moreover, Jim has a theory about growing healthy churches, which he calls "Don't cater to the kooks."  I just expand it to include the critics.  What he means, of course, is that you have to feed the culture you want to grow in a church. You don't make healthy churches by jumping through hoops for unhealthy people.  Instead, you encourage and support healthy people.

One morning I came to this same church in my winter wool skirt (long) and high-heeled tall boots.  One of the younger women came to me, excited about them.  "Now we can all wear those boots," she said.  And she told the story of another young woman who had worn some, and been told she looked like a harlot.  Of course, now that the pastor's wife wore them, they were okay.

The conversation opened up a whole new way of thinking for me.  If I have to be an example, let me be an example of what I really believe.  When spring came, I went out and bought nail polish in rainbow colors for my toes.

I look in the mirror with new eyes on Sabbath mornings.  I don't dress to offend the critics, but I don't dress to please them, either. I have never been hurt by the church fashion police, but I know that others have been berated, excluded, or kept from volunteering because someone disapproved of what they wore.  So I ask myself, "Can my example be used against someone else?  Could someone point to me to defend a theology I don't believe?"***

So what's my bottom line on this one?  Get dressed.  Be sure to wear clothes.  And try to suit them to the occasion, and the function.  Then put your mind on other things--things that truly matter.

By this everyone will know that you are my disciples, if you love one another.  John 13:35 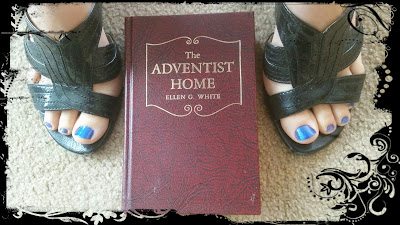 *Well, once, but it was a visitor, and someone with so little social sense that I can't really take it seriously.

**Okay, there is also the "reporting for someone else" tactic.  You know--where someone tells you, "I thought you should know that some people have been saying . . . "  This usually means "I said to my friends, and they all nodded, so they must agree." On really serious issues it comes out as "There are a lot of people who think . . ." but it translates to the same thing.

***I remember one morning when I realized I was wearing a denim skirt and sensible shoes.  Plus, my hair was in a bun at the nape of my neck.  I changed to pants right away.
Posted by theotheradventisthome at 12:46 PM