The Other Adventist Marriage

When I first met Jim, I thought he was a bit awkward, with an outdated haircut (he claims it was still in style) and open manners.  He thought I was ditsy, jumping out of a still-moving car to (loudly) greet a friend.  We worked together that summer, in a youth program selling books door to door.  I was impressed, as I got to know him, with his depth and moral courage.  He claims he liked my legs--oh, and my kindness.


I thought I knew, at 18, what I believed about Christian marriage.  I believed that I believed in some level of male leadership in the home, that there would be some earth-shaking decisions someday that couldn't be made without a tie-breaking vote.  I believed it, not because it made any sense to me, but because someone told me that's what the Bible texts meant.

At our wedding, four years later, the word "obey" did not appear in our vows.  We got married, and despite what we thought we believed, we went about marriage like a partnership.  Like every other functional marriage we knew, we discussed, we negotiated, and we compromised.  And we never came across that proverbial choice that needed one person to overrule the other.

We did, however, meet a couple who practiced true headship.  They are good people, but I was bewildered the day we ate dinner at their house.  The conversation wandered into a topic on which they must have disagreed.  The wife began to say something, and the husband interrupted. She started to protest, and he gave her a look, and she stopped abruptly and looked down.  Somehow, the awkward conversation recovered.  I realized then that it was that, and not the tie-breaker-vote model that was true male headship.  They were a loving couple, raising healthy children.  But they weren't a marriage that mine was ever going to resemble.

By the time we'd been married 15 years, I was ready to admit I don't believe in any form of fundamental and eternal male headship.  It was when the debate on women's ordination pushed me to deal with the texts, in defense of equality in the church.  I've come to the conclusion that neither Peter nor Paul, talking to persecuted first-century Christians in a hostile world where men and women were legally unequal, were not giving an eternal principle of male superiority.  Rather, the fact that they tell women to keep to their socially appointed roles, in the same manner as they advise slaves, probably means these women realized what the gospel meant for their freedom.  Now that I live in a modern world, in a country that claims we are all "created equal," I don't feel obligated to give some sort of homage to first-century caste systems.

I married a man who wanted a partner to tackle life with, not a dependent to lead and manage.  And I feel bad for that other man--the one who has to carry the burden of ruling his whole household, all alone. When the crying children, and the massive bills, and the unmanageable schedules hit, how lonely it must be not to share the task with someone who can shoulder the responsibility as a equal.

And I understand how attractive the thought is of a strong male leader. Jim is a strong leader. But I am his partner, not his follower, and I don't have to be subordinate to make him strong. Because I know now what I believe about Christian marriage.

I believe that two people can work together without one needing to be in charge of the other. I believe that the greatest intimacy, the truest one-ness, happens between people who meet as equals. And I believe a bond of love, and not of rank, best displays the image of God.

This is the other Adventist marriage. Because at the end of the day, I also believe in him—the guy with less hair than the day we met, but the same moral courage. I trust him. And he trusts me. Long live marriage. 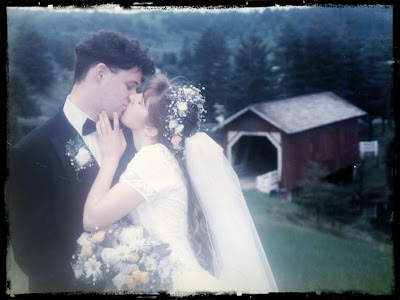 Posted by theotheradventisthome at 7:31 AM