I remember the first time I was told I was not a young adult.  We were in a group, talking about a new worship service which some actual young adults wanted to start. I was intrigued--what would it be like to do church differently, in a way that made sense to people like me? I was a little surprised when our friend pointed out we weren't in the target age group.  I was in my early(ish) thirties.  And since I was hanging out in churches, I had no reason before not to think of myself as young.

It is a hard process to evict "young" from my definition of myself.  It's been part of my identity for as long as I've had one.  It was part of what made my opinions matter, what made my contribution laudable. I am hoping, of course, that I'll get to the place where my age makes me admirable again--"How can she do all that at her age?"  At the least, I want to reach the point where I have an excuse for forgetting things, or can beg off the jobs I really don't want by insinuating vague health issues. (Yes, I know these goals are contradictory.)  But I'm not ready yet.

Aging is too big an idea to swallow all in one mouthful.  I'm 40 now.  A couple of years ago, being 40 was incomprehensible.  I realized (in a wash of terror one day) that it was getting close, and I spent the last couple of years acclimating to the idea, like a diver descending slowly into the depths.  At every age, I have to redefine what I think of as "old" and also what I think I am.

Life is a trip with no rest stops, no detours, no return access to the freeway eastbound.  I cannot find the place I want to be and stay there. I can't slow down.  I can only keep choosing the person I want to be, and keep becoming them.  Again, and again.

Today my wonderful husband Jim celebrates his 40th birthday. I'm grateful to him for catching up with me (especially since I mentally assigned him to the 40s as soon as I got there).  It's amazing how different the trip feels, when I'm not travelling alone. It's remarkable how much younger the number is when it applies to someone else, someone I've known since our teens.  He is not old to me, and I can't imagine when he might start to be.  He's just wiser, funnier, and stronger than when I met him.

And maybe that's the secret to aging.  Because I know, in my more lucid moments, that Jim sees me in the same way.  If I trust in his judgement, then the candles on my cake can't really hurt me. The secret to aging sanely might just be "Don't do it alone."  If you have a friend to go with you, you're going to be all right.  It's not just about not being lonely, it's perspective.  It's knowing you don't have to be a young adult to still be you.

The Bible has some nice things to say about aging.  I looked them up, though, and unfortunately, they are primarily about getting wisdom and honor with gray hair.  Since I'm trying to ignore the hair things, I decided to go somewhere else for this one:

"Two are better than one, because they have good return for their labor; If either of them falls down, one can help the other up . . . "
Ecclesiastes 4:9, 10

(And when you really need to feel like a young adult again, you can always hang around at church.) 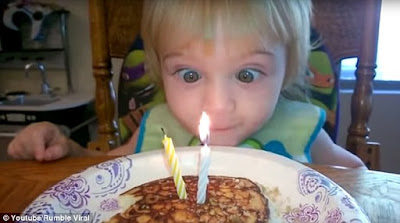 *Yes, I will generously share with him the wisdom I've gathered in these nearly 4 months of being 40 before him.

Posted by theotheradventisthome at 11:30 AM