I have to give my church's General Conference President credit--the long and formal church governance meetings have ceased to be boring under his leadership.  It's been six years since the conflict over ordaining women broke onto center stage again, and church entities first went toe-to-toe on it. I can remember, early on, joking with a friend of mine about watching the meetings online for entertainment.  And yes, popcorn figured into our plans.

But lately, the entertainment value has shifted into a genre I don't watch for fun.  I still tune in, but it feels less like watching a football game, and more like a public execution.  Or maybe it's just a poorly paired boxing match. I see my team put up a fight, but there is no real hope.

This year, of course, we were all a little surprised when Annual Council came out as, essentially, a draw. The action being considered was sent back to a committee to be considered further, and likely returned to the floor next year. Probably all the church was in consternation trying to figure out who won.

And this is my first peace offering: I know my distress over watching is because my team is losing. Sure, I think the refs are biased (the refs are, after all, playing for the other team).  I see unfair calls, but it's the final score that matters most to me.  So when I see my friends on social media popping their own popcorn to cheer for the other team, I need perspective. I need to consider what it feels like to be them.

I have a terrible truth to share. I don't want it to be true in this case, but I am afraid it must be, and the popcorn is my reminder.  It's this--we are usually closer to our opposition than to anyone else.

This is how I learned that:

A few years ago I was in a, let's say "interpersonal conflict" with another church volunteer.  It was new territory to me--I haven't had many of these before.  We were working together on an event, and it felt like every time there was a conflict, we were on opposite sides.  Actually, we were the opposite sides.  It was starting to feel personal.  While I was sure I was being honest in my opinions, I wondered if she didn't like ideas just because they came from me.

Finally we came to an impasse. There was a certain job we both felt best qualified to do.* We were both getting pressure from different sources to do it.**  It was intense.  For days, I went to bed, and couldn't fall asleep because I was too wound up, and I couldn't stop thinking about it.  I wanted desperately to distract myself.  I woke too early and couldn't get back to sleep.  I had no appetite, but I ate junk food, looking for something to feel happy about.

I felt trapped. I wanted to drop the project--the emotional cost was too high. But I had to fulfill my commitment. So I prayed about it as honestly as I could.  And then I cornered her one evening to suggest a compromise.

She didn't like it.  I could see her anger grow while I talked.  So I wasn't surprised--actually kind of relieved--when she let me have it after I finished. I don't know how long it took--maybe ten minutes. I had to stop myself, over and over, from framing replies in my head, while I listened.  And I'm glad I did, or I would have missed something important.

While she vented her anger, she told me how miserable her life was because of me.  She was having trouble sleeping.  She didn't want to eat.  She was miserable all the time because she couldn't get it out of her head.

I was supposed to feel guilt, or maybe anger, but strangely, I started to feel relief.  Even joy. Finally, FINALLY I was talking to someone who understood me.  She knew--she knew what I was going through. She was still wrong, of course, but I loved her anyway.

We compromised, and I promised I valued her.  But I couldn't really explain my feelings, and I understand if she thought I was faking it to make peace. We certainly didn't start agreeing because of it.  But it changed the way I saw her, and I still love her.

We are closer than we think to our "enemies."  That's good and bad news.

First the bad news. On one side, it means that who goes out and pops popcorn is less about having a purer character, and more about who is winning.  That's what it means to be polarized.  The same things happen to us when we feel pushed into a corner, no matter which corner it is.  We start talking just to our own side.  We let off stress by laughing at a caricature of the other side. We start to give an ear to fear-mongering. Maybe worst of all, we hold a double standard, using the same bad logic we condemn in others. And we justify ourselves because of how bad this image is that we have made of our enemies.

That's the bad news.  But there's good news.  There is someone out there who understand us, even if it is from the opposite side of the mirror. They, too, care enough to get involved.  They, too, feel enough conviction to try. They, too, want the organization or project or cause to succeed.

And they feel the pressure, too. For every fear of a church take-over by the supressive barefoot-and-pregnant crowd, there is someone else insisting it will be taken over by militant, secular, anti-moralists*** The world looks a lot different from the other side of the stand-off.  The problems look different, the proportions are all rearranged.  And I realize, in my saner moments, that if I believed that view of things, I might say the same things, want the same things.

This is what it means to be polarized--the conflict pushes us further and further toward the edges, further and further apart. Until we realized (if we ever do) that the poles bend, and we have come back together, staring at one another through a mirror, opposite but equal.

But that's not where we have to live.  I think there's a path forward for our church, but it isn't out at the edges.

We are a church family.  My experience of being in families says that we don't usually "solve" our arguments.  We live together in spite of them. We make allowances, and we put up with things we don't like, because we still love one another.  Because our relationships aren't based on the arguments, they're based on things we value more, things we have in common.

So this is my tribute to my friends on the other side:  I get it.  Maybe not your convictions, but your experience.  We didn't want to be in this together, but we can't help it.  And it turns out we have a lot more in common than it seems.

It's my hope, too, that we will get a chance to figure that out. I hope we can swim back upstream from the poles to which we've been relegated. I hope we remember how to be family.

For my own part, I intend to practice listening to you, even when I know you're wrong. And maybe we'll get a chance to remember all we agree on, after all. 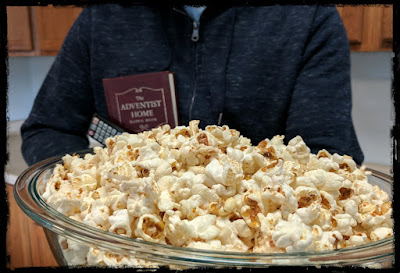 *This is the most unbiased way I can explain the situation. Rest assured that it felt much more complicated at the time.

**Of course, I didn't know about her pressure then.

***What these people would want with a church, I don't know, but that's really not the point.
Posted by theotheradventisthome at 12:52 PM