An Adventist Tourist in Rome


I have to admit it was awkward at the Holy Stairs. The couple ahead of us were climbing on their knees. The sign above them said to walk. And there I stood, Protestant and historian, both in awe and embarrassment, staring down the ordinary-looking marble steps. It would have helped had they at least looked older. Like the well-kept Basilica we'd just exited, the shine was fresh, and a chapel and gift shop were promised at the top.

In the end, I did kneel, soaking in the moment and the touch of marble, but ascended on foot (and discovered, afterward, that these were the replica, and the truly holy ones were the identical steps beside them). In the gift shop (where everyone spoke in a whisper) I bought a tiny silver cross and tucked it in my purse. 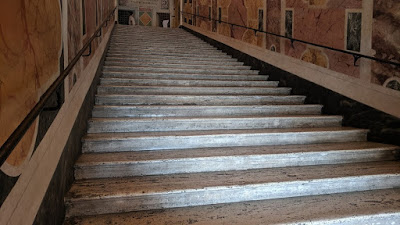 The Holy Stairs. I really expected these to look older, or at least not like all the other marble in all the Basilicas.

It had been a little easier in St. Peter's Basilica. Although the toe on the saint's famous statue had clearly been kissed to a high polish, none of the other tourists were baring their lips. We filed by in a line, and I had a moment to touch the amorphous foot and  stare into the copper eyes.

So how does an Adventist tour Rome?

This was our 20th anniversary trip. I'm obsessed with church history, and in love with ruins, so this is where my awesome husband took me. I needed some time to imagine the ages boiled in to the cracking stones, and touch the wonders (quietly, while no one was watching). But there is a fine line between a tourist and pilgrim, and I wasn't always sure on which side I wanted to tread.

And here is where the Adventism comes in. Because, as such, I am supposed to be above my very Catholic surroundings. I should look upon the rituals of worship with the eye of an anthropologist, respectful of the age, but untempted by the customs. The cathedrals are gaudy, overdone. I am well aware they were funded by tithes on starving peasants. The saints are conspicuous, wreathed in impossible stories. The candles and beads and relics are unnecessary.  The stairs were meant to be a cautionary tale, told through Luther's eyes, of Rome's perversion of the story of grace. And so it is. But I find it's more. I can't stop at the edge of the Adventist ethos. 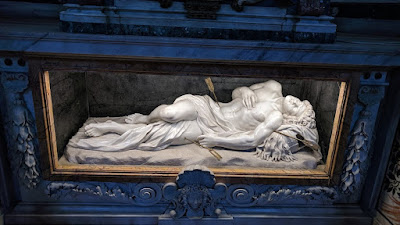 The relics of St. Sebastian, martyred twice (the first didn't kill him) were presumable held near this image.

History has a kind of holiness, well known to its faithful. And ancient places of worship are more than architecture. If Bethel was holy because Jacob dreamed of God, then what happens over a hundred, or a thousand years of people seeking God in the same place? If my Sabbath School teachers wanted me to whisper in church, how can I fault the nuns for doing the same? What if the candles and rosaries aren't simple superstition, but a way to engage the senses in worship? What if this history is mine, too? My Protestantism isn't a divorce from the Christian story (any more than my good fashion sense cancels my relatedness to Great Uncle Hugo).*

So I walked through Rome straddling the line between the pilgrim and tourist. I breathed the damp underground air of the catacombs, fingertips brushing the dust where Christian bones were laid. I craned my neck to soak in the ornate ceilings of cathedrals well-calculated for awe. I wandered the fields of broken Roman stonework and read the saints stories, and tip-toed awkwardly up the Holy Stairs. And I perused the gift shops and admired the icons and rosaries, but I came home with just that little silver cross.

And I'm satisfied. I am an Adventist, and I don't regret it. All the marble and storytelling of Vatican City can't tempt me away from my heritage. But I can love it too, because it's all my heritage. Rome was intense and beautiful (although not the subway system) and exhausting. I couldn't live in that space--neither the physical nor the emotional. But I am grateful for the experience.

Some relationships are too important to give up, even when they're awkward. Some stories have to be retold, whether we identify with the characters or not. Some spaces are sacred, even if we don't personally dream of heaven there.

I am an Adventist. If I have a message for the world, I want it to make me more respectful, not less, of those who worship around me. I want to see them with the eyes of the God who holds membership in no denomination. I want to speak in a voice informed by listening. I want to be a good neighbor.

I believe my church can do the same. We will because we are bigger than Big Franks, deeper than our sectarianism, and not at all interested in becoming a relic. 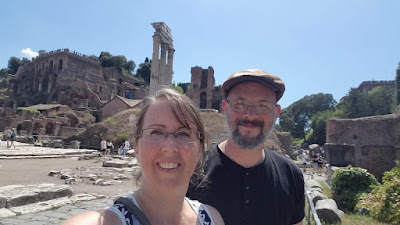 *This person doesn't exist, since I can't really shame a family member for rhetorical purposes.
Posted by theotheradventisthome at 3:48 PM