Immigrant Children and the Adventist Conscience

This last week, lawyers visited a Texas facility where immigrant children are held. My social media feeds have exploded with reports that turn my stomach--toddlers without diapers, children without beds. Government lawyers arguing that soap and toothpaste aren't required. Filth and malnutrition and despair. I am torn up about it.

I'm torn as well. You see, on Twitter I'm "The Other Adventist Home." Whatever I say, I say as an Adventist voice, not as myself. The debacle, and the debate, are marinated in national politics, and Adventists aren't supposed to get into politics. (We'll lose our tax-exempt status if we do.)

This is why I decided to talk about it anyway, and I think you should, too:

The landscape of US politics has always been hard for Adventists to navigate. We're (typically) morally conservative, but also well-educated and serving in helping professions. And of course there's our eschatology, which says the US is prophesied--in time--to outlaw our Sabbath-keeping. So maybe we want small government, but we're also leery of legislating personal morality. In a(n effective) two-party system, there aren't many places to go.

It puts members in a quandary each election season. I remember conversations over potluck debating which candidate was going to start the religious persecution and bring in the concentration camps.* There were always concentration camps in the picture, usually claimed to be already built, ready to house us. ("Listen to this cassette recording of a speaker who's seen them in with his own eyes.")

And I wonder, as I look at today's news, read today's debates, if these same Adventist believers recognize the fulfillment of their prophecies. Are the camps still inhumane if they aren't housing Adventists? Is our country still speaking like a dragon if it isn't talking to us? Do we care if kids have beds and toothpaste if the Sabbath isn't involved?

On Twitter, my feed is full of two kinds of content--horror over the lack of soap, and concrete floors, and cheery official Adventist sources, handing out generic devotional messages. Maybe we need devotional messages in distressing times. But it would help, at least, to acknowledge the distress.

I know why the silence, of course. We have a knee-jerk fear of politics. We don't tell you what to vote (at least, not officially), and if we talk about something related to government policy, we'll be "taking sides." But not all of politics is taking sides. There are issues, like human rights, that transcend parties.

I don't care what the rhetoric is, no one's political views require them to think children don't need beds or clean clothes. It's not in any party's platform. You don't have to give up your party, or even your immigration views, to care about this. But there is a danger in not caring.

Politics, after all, isn't a separate, intellectual exercise. It's just the way we use resources and make policies. And what we think of as "politics" is just the maneuvering needed because we disagree how to do it. Politics is about our lives, and that's the place where faith is acted out. We don't hold our opinions in a vacuum. They effect the people around us. So if you feel convictions about human rights, there is no special category of "politics" that lets you off the hook about them.

Moreover, we are followers of a Messiah who said helping the needy was a reason for his anointing:

The Spirit of the Lord is on Me, because he has anointed me to preach good news to the poor. He has sent me to proclaim deliverance to the captives and recovery of sight to the blind, to release the oppressed, to proclaim the year of the Lord's
favor.

And who also expects the same acts from his followers:

They also will answer, ‘Lord, when did we see you hungry or thirsty or a stranger or needing clothes or sick or in prison, and did not help you?’
He will reply, ‘Truly I tell you, whatever you did not do for one of the least of these, you did not do for me.’
Matthew 25:44, 45

If the gospel has nothing to say about children deprived of their basic needs, it's not the gospel Jesus handed to us. If our gospel doesn't effect how we treat the vulnerable in our midst (whatever our feelings about how they got there), then it has failed. The God who reaches into our sin to redeem us--at the cost of crucifixion--cares about the suffering of children, however it came about. You don't have to profess a certain political view to care about them, too. You just have to profess faith in this God.

So you have a choice. If the reports about child detention facilities don't bother you, then I won't trouble you further. But it you mind, then say so. If you object, then object. It's not disloyal, or partisan. And if you support those leaders who are justifying the abuses, then real loyalty involves accountability.

There's never going to be a perfect world, as long as we live alongside sin. There is no party that can fix all of our ills, or serve our country with perfect selflessness. But you and I have the choice to serve God first, in our politics and outside of them, to serve one another, and to serve those in need. 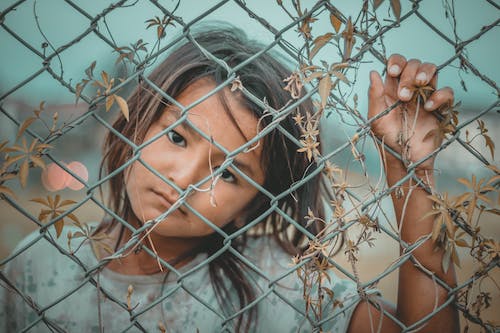 *The favorite, laudably bi-partisan answer was both, because all politicians are bad.
Posted by theotheradventisthome at 3:46 PM