How to Feed a Church Family

One of my major failings as an Adventist is that I don't have a standard potluck dish.  Yes, I know it's horrible.  I do bring the same thing to potluck every time, but I don't make it--Stouffer's does, and I deliver it in its frozen, microwavable package to the kitchen in the morning, and don't think about it again.*

I am a fan of potlucks even though I am not that useful in the church kitchen.  There was an era when I used to hang out in the kitchen, but it was so that I could chat with my friends who were doing the actual work. We had a church that served potluck every week, so there would always be somewhere to invite guests.  I remember one week, when the food was scarce, watching as a friend pulled items from the pantry and had to invent a new dish to use them together.  I was so impressed. I insisted he needed to have a cooking show called, "The Desperate Gourmet," and we'd feature his new dish as "Potluck Surprise." I don't think he was as entertained as I was, but his food turned out well.

I on the other hand made potluck history in that church by bringing the first ever liquid brownies. Apparently, I pulled them from the oven too soon on Friday night, and we had a meeting to go to that evening, so I didn't check them.  The top looked fine.  And it still looked fine until the moment the faithful potluck people cut into it, and discovered it was runny under the surface. 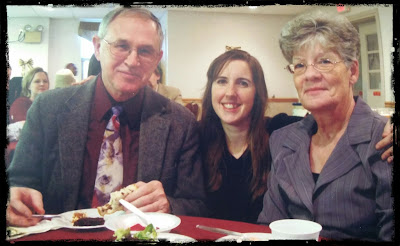 And that's one of the things I like best about potlucks--they're funny.  We may as well admit it--it's funny that we can set down our pan of gluten-free oat burgers next to the pan of gluten steaks. Or that we can use our special egg-free mayonnaise to mix up the filling for our deviled eggs (and, some places, we have to call them "angel eggs" instead, since they're in church).  It's funny that a dish made of mostly whipped cream and mandarin oranges gets to hang out with the salads, or that dessert might be half the volume of the table.

It's funny.  But it's not bad. Because we're eating together.  Yes, I know we could be healthier, but that's not the point. And I'm not sure I would enjoy eating in the church that took very public pains to make it healthy. Because, and this is the point--it was never really about the food.

We don't eat together because we're hungry.  We aren't looking for food.  We're looking for glue. A church is a collection of wildly different people--different incomes and educations, different histories, different opinions, even different reasons for being there.  We meet together one day a week, when we sit in the same room and listen to the same person talk.  And that isn't a relationship. We need something else, or the people we sit next to won't really be our church family.  And church will just be a very inconvenient and time-consuming way to hear ideas. 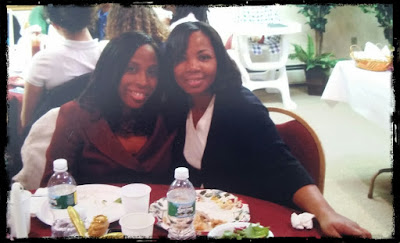 If God is love, and we are made in his image, then it stands to reason that we need relationships as much as we need words, in order to understand him.  And so, beautiful and inadequate to the task, we have the Fellowship Meal.**  It offers us two gifts, small though they are, to begin building our relationships.

The first gift is time.  Food makes us stay in the building longer.  It takes time to send a room full of people past the food tables, serve them beverages, clean up after them.  And since we're standing in line together, or sitting at the same table, we might as well talk.  Time is a gift.  There will never be enough of it, but the Fellowship Meal has forced us to share some of it with one another.

The second gift is comfort. If we're honest, whether we're eating in public or private, food is about more than nutrition. You know this instinctively if you've ever been served "refreshments" after a long children's school concert.  There is an emotional weight to food,as dieters can attest. The act of eating together brings us into a shared emotional space. 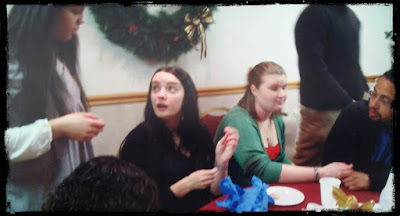 So today I want to honor the potluck, and those who make it happen.  It isn't a flashy thing, to time the casseroles and wash the dishes, but the men and women who create the potluck are creating church, just as much as those who run the worship service. Their labor helps us to know one another as real people, and not just sharers of the same ideas.

And as for the food, keep bringing it.  Pick up a frozen entree, or wring out the pantry and whip up a Potluck Surprise.  And if the brownies turn out runny, don't let it keep you away.  Come, and eat together.  Because it never was about the food. It's about the church. 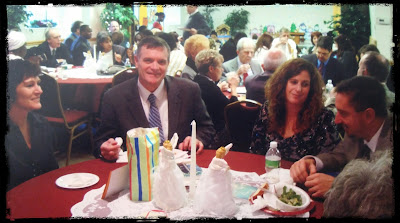 *One of my favorite parts of this arrangement is that I don't have to remember to pick up my dish afterward.

**This term sounds better than potluck, but it has another advantage as well.  If you use this title, your invited guests are less likely to think they need to bring food, thus saving you from having to explain why their food won't work, even though it might be just as healthy as what's on the table.

Posted by theotheradventisthome at 12:23 PM