The Progressive Church, the Peculiar People, and the Beast

I remember the question vividly, "How would you describe a progressive church?"  I was sitting in an interview with a church in Boise.  It wasn't my interview, so I wasn't supposed to answer the question.  But the answer was burning in my brain, so I took a turn when Jim was done.

What is a progressive church?  My answer was this--it's one that lives in its own time and place.  The church board to whom we were speaking seemed to like the answer, but as I sit back and think of it now, I don't like it. Being progressive ought to mean pushing ahead, anticipating the future.  But in church, it means simply not falling behind. Or at least, not too far.

And progressive isn't a favorite word for Christians trying to be a "peculiar people," I know.  Ever since Paul started talking to us about not loving "the world" because it was going to pass away, Christians have had the joy of debating just what we should call "the world" so we can spurn it. New music, new fashions, new entertainment, are all easy targets.  But of course, the problem here is that we end up snubbing them in favor of old music, old books, old fashion. And we have to pretend that these things weren't new once, and targets themselves.

Today, I am writing in praise of progressive churches. I love them. I feel moved by worship music with a beat. I feel at home when some worshipers are in heels, and some are in jeans. And I can best relate to a sermon that feels like a conversation.   I won't pretend that it's a virtue to be in touch with one's own time--liking the music, wearing the clothing, understanding the pop culture. But let's be honest--there's no virtue in being out of touch, either.

And there is a usefulness in knowing the language of modern culture. People put their souls in their songs and stories. The way we speak and dress are our self-expression. If we want people to hear what we say, we have to know the language first. The modern world might not have the answers for its own pressing questions, but if we don't know what the questions are, neither will we.   Jesus cannot be the answer until you know what you are answering.

I went to see the new "Beauty and the Beast" this week.  It's a beautifully made movie, and in spite of the dancing cutlery and singing candlesticks, it really has a serious idea at its center, spoken at the end of the opening scene.  "Beauty," the narrator intones, "lies within."  The petted prince who will become the Beast is obsessed with beauty, but he's also clearly jaded with it. He's focused on externals, and they're letting him down.  There are two ideas I'm left to chew on:

The first is that Disney is right.  We watch the movie because we know from experience that externals can't make us happy.  We want something more.  Christians have known this for centuries.  And yet, in this century, thousands of people will pay Disney money to tell them that.  Why are they better at saying it than we are? And, since we have so many more important messages to share with the world, shouldn't we learn how to speak the language they're listening to?

Or we can go the other way.  We can decided that storytelling and imagination are no good because Disney has already claimed them.   We can work very hard to not sound like the music people are already listening to, so they can see we're different. We can take pains to not look like the people they live and work with.  We can take the concept of being "a peculiar people" and run with it as far as it will go. But it seems to me that we will have missed the point.  We will be just as obsessed with externals as Disney's ill-fated prince. That's the second idea.  If our gospel is bound up in externals, we can expect as much joy as the Beast.

So I'm going to live in my own time and place.  I will confess that, although I am a citizen of heaven, I am a native of this country, this century.  I know its language, and I want to speak it.  Because Jesus is the answer, and I want to say it effectively.  In the end, a church that has something to say to its own world, and talks in a language they can hear, might just be peculiar enough. 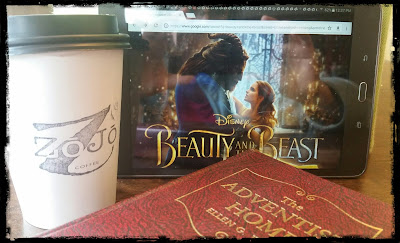 Posted by theotheradventisthome at 12:58 PM