Why I Don't Say Jesus is Coming Soon

Church has a special language.  We learn this as kids, when we go to Sabbath School and sing about "This Little Light of Mine" which really isn't a light.  The teachers tell us to be good sheep, but then they make us walk upright and speak in words.  Most disappointing of all, they offer us swords, and then hand us the Bible.  But we learn.  Church has a different language, and words mean something a little different there.

I don't remember what age I was when I realized "soon" had more than one meaning.  There was the usual soon--as in, when I should be ready to leave for school.  And then there was the Second Coming "soon."  There's only so long you can go, expecting it to happen in a few days, or a week, before you catch on that this a different meaning for the word.  We go on believing Jesus is coming soon, we just have to change the definition a little.

For more than 150 years, our church has proclaimed that Jesus is coming soon.  It is our first doctrine, from back in Millerite times.  It's very nearly the center of our identity, people who care about getting things right, from the Bible, because Jesus is coming soon.  But we have to admit that it hasn't come as soon as we expected.

We're not the first.  At the end of the book of John, Jesus tells Peter, "If I want him (John) to remain alive until I return, what is that to you?"  The twelve expected him to return in a single lifespan.

I've often thought, as I hear someone fear-mongering about world events signalling the end, what it would have felt like to live through WWII, to learn about the Holocaust.  Surely, the world couldn't continue any longer after those things.  But what about the fall of Jerusalem, or the collapse of the Roman empire?  US politics might be intense right now, but they're not barbarian-hordes-and-Nero-burning-Rome intense.  It's painfully possible we will have to live beyond this, too.

I have three kids, and like every Adventist parent before me, I don't expect them to grow up and have their own kids before the Second Coming.  But I don't say "soon" to them.  I say someday. It's hard enough trying to explain how long they have to wait for Campmeeting, and I'm just not ready to try explaining the other.

Someday, not soon.  How can I justify that kind of heresy?  It's because one day I quit listening to the evangelists, and listened to the teacher who sent us back to Matthew 24 with more careful eyes.*  It's because the same Jesus who said, "Yes, I am coming soon" (Revelation 22:20), also said, "see to it that you are not alarmed . . . the end is still to come." (Matthew 24:6)  In fact, look at the larger passage:

You will hear of wars and rumors of wars, but see to it that you are not alarmed.  Such things must happen, but the end is still to come. Nation will rise against nation, and kingdom against kingdom.  There will be famines and earthquakes in various places.  All these are the beginning of birth pains.
--Matthew 24:6-8

The point isn't the wars or the earthquakes.  Jesus isn't trying to shake the disciples up.  He's trying to comfort them.  And the last illustration is telling--birth pains.

At 2am on January 25, 2007, I woke in labor.  It was my first child.  I didn't know how it would go, but I knew for certain now that my daughter was coming.  I took a shower.  I braided my hair so it wouldn't look awful in the new-baby photos.  I packed the last items I would need at the hospital.  I was nervous, but excited.  I didn't know how long it would take, or how bad it would be.  But I knew how it would end.

Soon isn't the most useful word, even though we get closer every day.  Soon tries too hard to tell us when, but it isn't the point.  The point about the Second Coming, is that it's certain.

After 2000 years of waiting, after seeing every sign of the end repeated ad naseum, after the public pain of the Great Disappointment, we have to answer the question of whether it's even going to happen.  Were we all fooled about this?  Was the promise false?

That's the moment we can be glad Jesus said it's not yet.  Whatever the cause of these last 2000 years, I'm glad he warned us not to be alarmed. It's still coming.

And I still believe in it.  I am a Seventh-day Adventist.  I believe my Savior is coming again.  Not because the world is falling apart, but because he promised it. This is the point.  I don't know if this is the end, or just another contraction.  But I know it will end, and I know how, and it's good news. 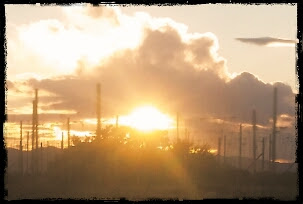 *Dr. Jon Paulien, to be precise, who deserves a lot more credit for this reading of Matthew 24 than I can give here.
Posted by theotheradventisthome at 7:33 AM